FOR IMMEDIATE RELEASE No. 3184

Over 2,000 Diamond Vision displays have been installed in Japan and abroad since 1980

TOKYO, March 8, 2018 - Mitsubishi Electric Corporation (TOKYO: 6503) announced today that the company's Diamond Vision™ series of outdoor large-scale color display systems has received the prestigious IEEE Milestone award from the Institute of Electrical and Electronics Engineers (IEEE). Diamond Vision is Mitsubishi Electric's series of proprietary displays, of which more than 2,000 have been installed globally since the first unit was introduced at Dodger Stadium in Los Angeles, USA in 1980. The award recognizes the prominent role and high esteem of Diamond Vision as the world's first outdoor large-scale color display systems for creating impressive video images. 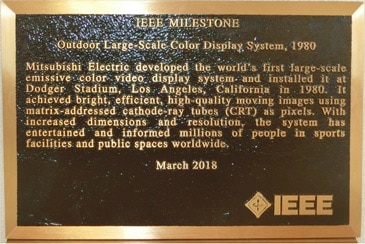 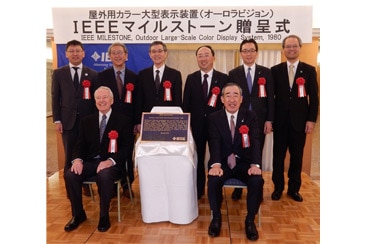 Up to 1980, electric scoreboards at stadiums conventionally only used incandescent lamps to project just letters and numbers. In response to growing demand for screens that could project images as beautiful as TV images at distances of up to 100 meters, Mitsubishi Electric successfully developed a three-color (red, blue and green) compact cathode ray tube (CRT) capable of displaying brilliant full-color video even in sunlight. Also, the company's new software could be used to control images, music and other content, providing a tremendous boost to in-game entertainment at stadiums.


"We are deeply honored to receive the IEEE Milestone for Diamond Vision," said Masaki Sakuyama, President and CEO of Mitsubishi Electric. "This is the first time our company has received this honor exclusively and it also represents the first IEEE Milestone to be received by a company in the Kyushu region of Japan. We are proud that Diamond Vision has continued to deliver highly impressive video images to spectators around the world for more than 35 years. We will continue to challenge ourselves to develop other useful technologies that truly enrich people's lives."


Since the first installation at Dodger Stadium, Diamond Vision displays have been adopted for use in a wide variety of facilities. Over time, Mitsubishi Electric's engineering innovations have driven the evolution of light-emitting elements used in large displays, first by replacing single cathode ray tubes with flat matrix CRTs, and then replacing these CRTs with LEDs. Such changes further improved the video quality and led to the increasing use of Diamond Vision displays in diverse event facilities, not just sports stadiums. As such, Diamond Vision has played a profound role in delivering highly impressive video images to spectators around the world.


In recognition of these achievements, the IEEE has now honored the world's first technology for large, full-color displays useable in sunlight, noting that Mitsubishi Electric has continued to evolve and improve its proprietary imaging system more than 25 years after first introducing Diamond Vision to the world.