FOR IMMEDIATE RELEASE No. 3227

Will contribute to stable power supply of large-scale wind turbines

TOKYO, November 19, 2018 - Mitsubishi Electric Corporation (TOKYO: 6503) announced today that has received an order for its BLEnDer® RE energy-management system to monitor and control the battery and power conditioners (PCS) of what the company believes will become the world's largest energy-storage system (240MW output and 720MWh rated capacity) at Kita-Toyotomi Substation in Toyotomi, Teshio, Hokkaido, which is owned by North Hokkaido Wind Energy Transmission Corporation. The order has been awarded by Chiyoda Corporation, which will execute the design, engineering and construction for the Grid Reinforcement Pilot Project for Wind Turbines, which is led by North Hokkaido Wind Energy Transmission Corporation under the auspices of the Ministry of Economy, Trade and Industry's Agency for Natural Resources and Energy. The energy-storage system is expected to commence operation by March, 2023. 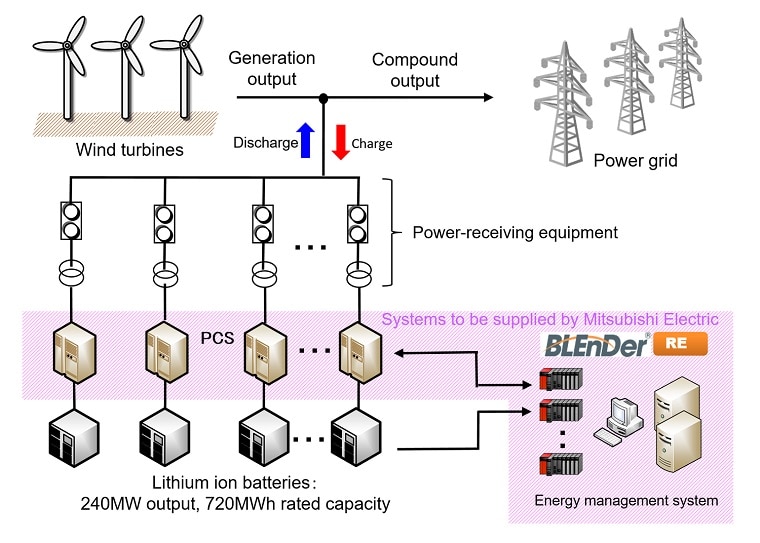 Upper Hokkaido in northern Japan has favorable wind conditions and abundant open land, making the area suitable for wind turbines. Renewable-energy power suppliers have been applying to construct wind farms in the area, but as these wind farms proliferate, fluctuations in their power output will increasingly impact the electricity demand-and-supply balance. Consequently, energy storage systems must be introduced to improve the balance and thereby strengthen the grid with stable power supply.
Under the pilot project, Hokkaido Wind Energy Transmission Corporation will introduce transmission facilities and high-capacity energy-storage systems to enable groups of large-scale wind turbines of over 500MW to be connected to the grid in northern Hokkaido.

The BLEnDer® RE energy-management system monitors and controls batteries for renewable energy power supply. The system, which incorporates Mitsubishi Electric's reliable energy-management technology for stable power supply, will help to balance electricity demand and supply, such as power surpluses from renewable energy, and comply with Hokkaido's strict grid codes for connecting private-generation systems (wind-turbine and photovoltaic) to grids to sell power to utilities.

* BLEnDer is a registered trademark of Mitsubishi Electric Corporation